TORONTO, April 8, 2021 /CNW/ - Adventus Mining Corporation ("Adventus") (TSXV: ADZN) (OTCQX: ADVZF) and Salazar Resources Limited ("Salazar") (TSXV: SRL) (OTCQB: SRLZF) (collectively the "Partners") are pleased to provide an update on exploration activities at the Rosa de Oro and Carmen de Pijili concessions of the Pijili project located in western Azuay province, southwestern Ecuador. The Pijili project consists of three concessions which total 3,246 hectares and is located approximately 150 km from the major port city of Guayaquil. The project is controlled by the Partners in a joint venture that is 80%-owned by Adventus and 20%-owned by Salazar. Explorers and project developers in the direct vicinity of Pijili include groups such as Southern Copper Corporation and SolGold plc while this region in western Azuay has a high concentration of small-scale mining operations.

Jason Dunning, Vice President of Exploration for Adventus, stated: "At Pijili, we are taking a very methodical geoscience approach to our hunt for new porphyry and epithermal targets on the Rosa de Oro and Carmen de Pijili concessions. Our technical teams are applying the successful lessons learned from the definition of targets on the Mercy concession, approximately 8 km to the east, where we discovered a new copper porphyry system and continue work. These new work programs have generated four new exploration targets for follow-up from the integration of all available geoscience data. The new targets are expected to be drill-ready later in 2021 and further develop our exploration pipeline in Ecuador."

Work Summary
Salazar was originally interested in the area around where they staked the Rosa de Oro and Carmen de Pijili concessions because of numerous small-scale mining operations that extract materials from high-grade vein systems. Members of the Salazar technical team visited many of these artisanal miners located off the concessions to assess the potential target types. Examination in the field revealed a wide-range of precious-metal rich veins with some also being enriched in copper, zinc and occasionally, lead.

The Rosa de Oro and Carmen de Pijili concessions were formally registered through the Mining Regulation and Control Agency of Ecuador (ARCOM) cadastre system in July 2017 under the early exploration stage. In September 2017, Adventus and Salazar entered into an Ecuador-wide exploration alliance agreement (see September 14, 2017 news release), which was executed in March 2018. At the time of alliance formation, the Partners also entered into a definitive agreement transferring the Pijili project and its three concessions into the exploration alliance subject to a spending commitment (see March 29, 2018 news release).

Geology
During the second half of 2020, exploration activities on both Rosa de Oro and Carmen de Pijili concessions were ramped up to include geological mapping, hydrothermal alteration studies, and structural mapping that was to focus on the paragenetic sequencing of the veining and its link to possible epithermal and porphyry systems known to occur regionally. The regional geological framework shows a large tonalitic intrusion with a smaller diorite plug being emplaced into host mafic volcanic rocks underlying the Rosa de Oro and Carmen de Pijili concessions (see Figure 1). No age dating data is available for this area to confirm emplacement of the intrusions into the host strata, but they are believed to be Oligocene or Miocene in age based upon work done on the Chaucha intrusion that hosts Southern Copper Corporation's Chaucha copper-molybdenum deposit, approximately 10 kilometres northeast of the Rosa de Oro and Carmen de Pijili concessions.

No significant results were returned from 14 prospecting samples on the Papagayo target, but work continues advancing this new area. The mineralized samples had veinlets and fracture fillings of pyrite with minor chalcopyrite and trace bornite hosted principally in the mafic volcanic rocks. To date, mineralization has not been observed in the tonalite intrusive rocks, however, breccia units have been observed with minor pyrite and trace chalcopyrite that often have a boxwork texture comprised of hematite, goethite, and possibly jarosite.

The technical team has now started follow-up work on the prospecting results, and they are conducting detailed geological mapping studying lithologies, mineralization, and hydrothermal alteration. Four areas of possible potassic alteration were identified (Figure 1), but further alteration studies are required to distinguish if the source of the biotite is from hydrothermal processes or contact metamorphism from intrusion emplacement into the host volcanic rocks.

The mapping also includes structural work that has revealed the presence of at least seven types of typical, porphyry related veins and veinlets within the El Pato target area. Over 1,500 veins and veinlets have been mapped to date to evaluate the preferred orientation of favourable quartz-dominant veins and veinlets likely to be associated with copper mineralization. From the data collected to date, the predominant structural trend for most veins and veinlets is northwest-southeast, which is orthogonal to the northeast-southwest, larger scale regional faults and related structures.

Geochemistry
An optimized 200 metre by 200 metre spacing was established for collection of surficial geochemistry samples over both concessions. To date, a total of 562 soil samples have been collected from Rosa de Oro concession and 441 soil samples from the Carmen de Pijili concession. The initial review of geochemical supported the prospecting results and the delineation of four high priority targets. Technical teams have laid out additional soil sampling at 100 metres by 100 metres spacing for the high priority areas to delineate the targets more accurately. Copper and gold soil geochemistry results are presented in Figures 4 and 5 respectively, but it should be noted that infill soil sample collection is ongoing.

Various elemental ratios were also applied to the large soil geochemistry database for both concessions to develop exploration vectors that would further highlight priority areas. One of the more useful vectors was Pb/Cu, which is an "inverse ratio" with the distal, low-temperature element divided by the proximal, high-temperature element to increase the ratio contrast.

Another very useful vector when hunting for porphyry systems is to apply a modified targeting index developed by the Mineral Deposit Research Unit ("MDRU") at the University of British Columbia. The MDRU Porphyry Index ("MPIx") is a normalized ratio of ore-proximal (such as Cu, Mo, W, and Sn) to distal (such as Sb, Tl, Ag, As, and Li) elements. Figures 6 and 7 present the Pb/Cu and MPIx results respectively for both concessions. Both the Pb/Cu and MPIx ratio delineate the El Pato target, whereas the Naranjos and Rosa de Oro target are only weakly defined by the Pb/Cu and MPIx ratios. Technical teams are continuing infill surficial sampling at 100 metres by 100 metres to further define these high priority areas.

A manual test pitting program has recently been initiated where rock exposure is obscured by thick overburden cover with the El Pato target being the first area to be sampled. The technical team has a preliminary plan for 48 manual test pits on 100 metres by 100 metres spacing. Depending upon the extent of mineralization and or hydrothermal alteration observed at the bedrock interface, additional infill locations could be established on 50 metres by 50 metres spacing. Manual test pitting is also planned for the Rosa de Oro, Naranjos, and Papagayo target areas. No results have been returned from the laboratory at the time of this news release.

Geophysics
From the geophysical data, the El Pato target is spatially related to a magnetic low from the airborne MobileMT geophysical survey that trends regionally northeast-southwest.  This feature could be attributable to destruction of magnetic minerals from hydrothermal alteration such as the potassic and phyllic alteration, which has been mapped on surface in the vicinity of El Pato (see Figure 8). The Rosa de Oro target flanks the northwestern margin of a large CET pick (Centre for Exploration Targeting system) where field work shows areas of veining and mineralization associated with potassic alteration that appears related to a diorite intrusion (see Figure 8). Both Naranjos and Papagayo targets also flank a smaller, but circular CET pick (see Figure 8). The Naranjos target occurs to the northeast of the CET pick and Papagayo occurs south of the CET pick, however, as field work continues, these two targets may coalesce.

Next Steps
The technical team will continue the target generation initiative over the next four to five months focusing on the four high priority areas. El Pato is the furthest advanced of the four high priority areas and it is developing into a prospective copper porphyry target. The other three targets need additional field work that will be completed throughout the rest of 2021. The objective is to have drill-ready targets available in the fourth quarter of 2021.

Technical Information and Quality Control & Quality Assurance ("QAQC")
The Pijili project work program is being managed and reviewed by Vice President Exploration, Jason Dunning, M.Sc., P.Geo., a Qualified Person within the meaning of NI 43-101. Salazar staff collect and process samples that are securely sealed and shipped to Bureau Veritas ("BV") in Quito for sample preparation that includes crushing and milling to prepare pulps that are then split for shipment to their facilities in Lima, Peru and Vancouver, Canada for analysis. All assay data have undergone internal validation of QAQC; noting there is an established sampling control program with blind insertion of assay blanks, certified industry standards and sample duplicates for the Pijili project. A QAQC program is also in place at BV and includes insertion of blanks, standards, and duplicate reanalysis of selected samples.  BV's quality system complies with the requirements for the International Standards ISO 9001:2000 and ISO 17025: 1999. At BV, gold is analyzed by classic fire assay techniques with an AAS finish, while silver and base metals are analyzed by a 44-element aqua regia technique with ICP-AES finish. Overlimit protocols are in place for gold, silver, copper, and zinc.

Qualified Person
The technical information of this news release has been reviewed and verified as accurate by Mr. Jason Dunning, M.Sc., P.Geo., Vice President Exploration for Adventus, a non-Independent Qualified Person, as defined by NI 43-101.

About Adventus
Adventus Mining Corporation is an Ecuador focused copper-gold exploration and development company. Its strategic shareholders include Altius Minerals Corporation, Greenstone Resources LP, Wheaton Precious Metals Corp., and the Nobis Group of Ecuador. Adventus is advancing the El Domo copper-gold project through a feasibility study, while exploring the broader Curipamba district. In addition, Adventus is engaged in a country-wide exploration alliance with its partners in Ecuador, which has incorporated the Pijili and Santiago copper-gold porphyry projects to date. Adventus also controls an exploration project portfolio in Ireland with South32 Limited as funding partner as well as an investment portfolio of equities in several exploration companies. Adventus is based in Toronto, Canada, and is listed on the TSX Venture Exchange under the symbol ADZN and trades on the OTCQX under the symbol ADVZF.

About Salazar
Salazar Resources Limited is focused on creating value and positive change through discovery, exploration, and development in Ecuador. The team has an unrivalled understanding of the geology in-country and has played an integral role in the discovery of many of the major projects in Ecuador, including the two newest operating gold and copper mines. Salazar Resources has a wholly owned pipeline of copper-gold exploration projects across Ecuador with a strategy to make another commercial discovery and farm-out non-core assets. The Company actively engages with Ecuadorian communities and together with the Salazar family it co-founded The Salazar Foundation, an independent non-profit organization dedicated to sustainable progress through economic development.  The Company already has carried interests in three projects. At its maiden discovery, Curipamba, Salazar Resources has a 25% stake fully carried through to production.  At two copper-gold porphyry projects, Pijili and Santiago, the Company has a 20% stake fully carried through to a construction decision.

This press release contains "forward -looking information" within the meaning of applicable Canadian securities laws. Any statements that express or involve discussions with respect to predictions, expectations, beliefs, plans, projections, objectives, assumptions or future events or performance (often, but not always, identified by words or phrases such as "believes", "anticipates", "expects", "is expected", "scheduled", "estimates", "pending", "intends", "plans", "forecasts", "targets", or "hopes", or variations of such words and phrases or statements that certain actions, events or results "may", "could", "would", "will", "should" "might", "will be taken", or "occur" and similar expressions) are not statements of historical fact and may be forward-looking statements. 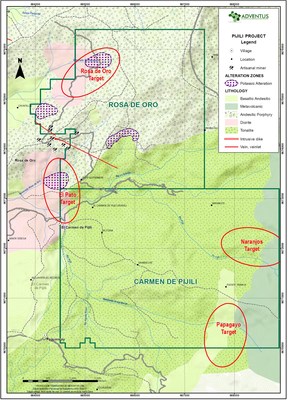 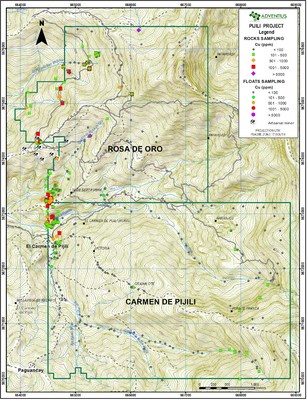 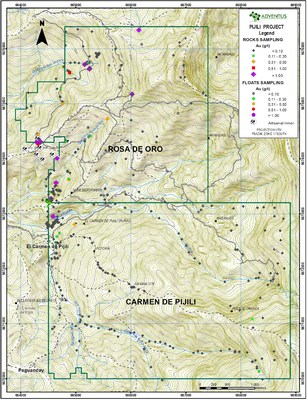 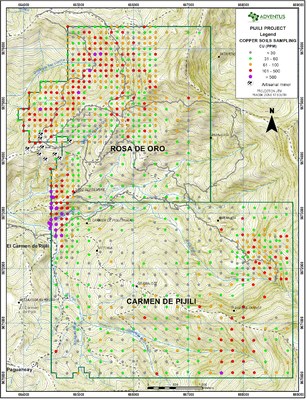 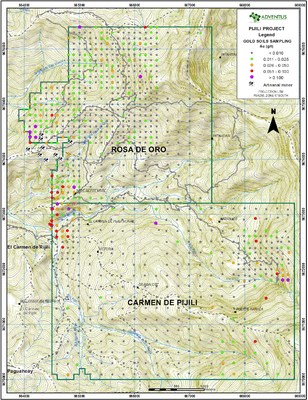 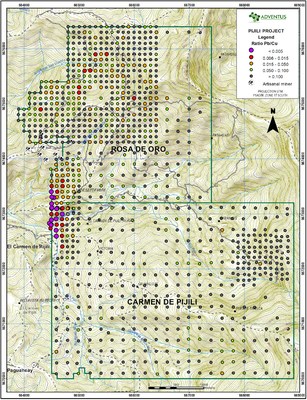 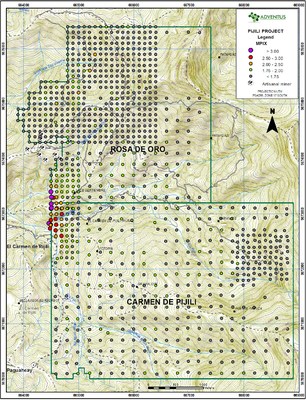 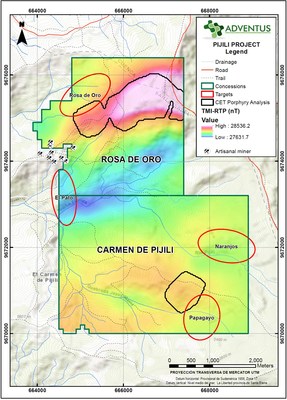 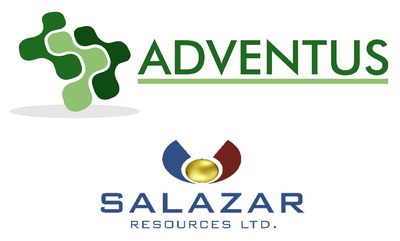