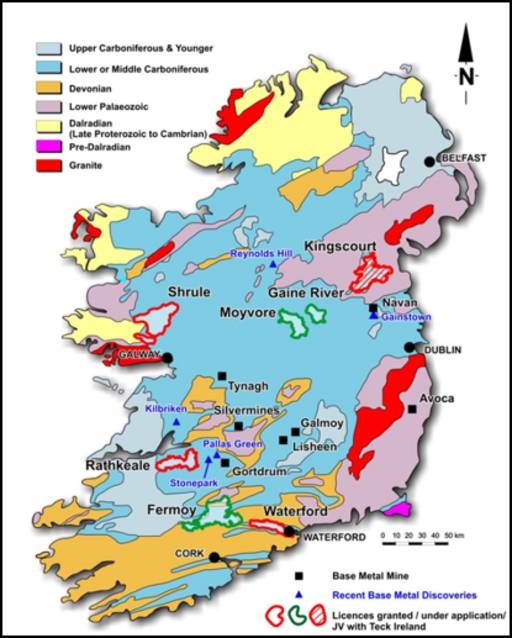 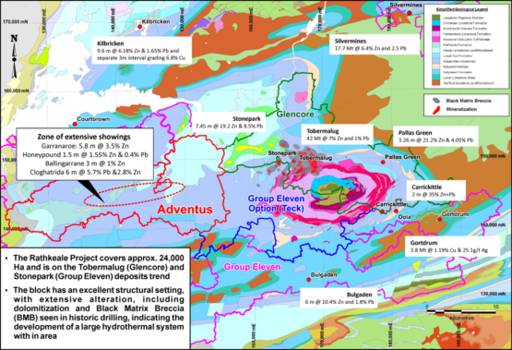 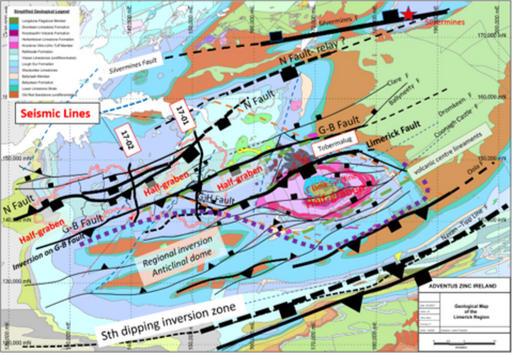 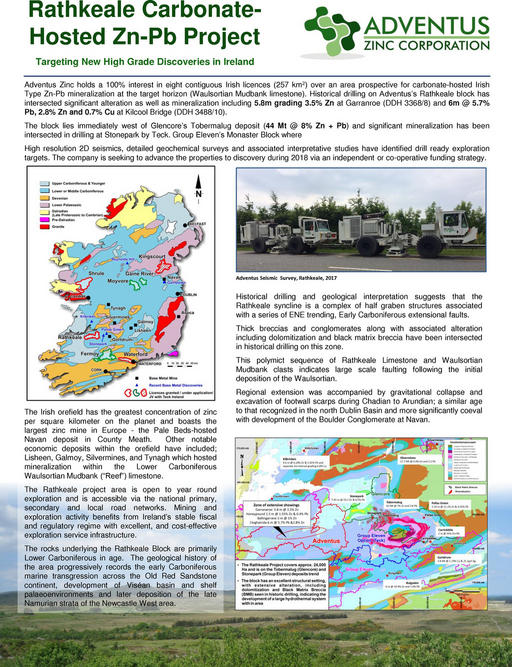 The block lies immediately west of Glencore’s Tobermalug deposit (44 Mt @ 8% Zn + Pb) and significant mineralization has been intersected in drilling at Stonepark by Teck. Group Eleven’s Monaster Block where

High resolution 2D seismics, detailed geochemical surveys and associated interpretative studies have identified drill ready exploration targets. The company is seeking to advance the properties to discovery during 2018 via an independent or co-operative funding strategy.

Historical drilling and geological interpretation suggests that the Rathkeale syncline is a complex of half graben structures associated with a series of ENE trending, Early Carboniferous extensional faults.

Thick breccias and conglomerates along with associated alteration including dolomitization and black matrix breccia have been intersected in historical drilling on this zone.

Regional extension was accompanied by gravitational collapse and excavation of footwall scarps during Chadian to Arundian; a similar age to that recognized in the north Dublin Basin and more significantly coeval with development of the Boulder Conglomerate at Navan.

The Irish orefield has the greatest concentration of zinc per square kilometer on the planet and boasts the largest zinc mine in Europe - the Pale Beds-hosted Navan deposit in County Meath.  Other notable economic deposits within the orefield have included; Lisheen, Galmoy, Silvermines, and Tynagh which hosted mineralization within the Lower Carboniferous Waulsortian Mudbank (“Reef”) limestone.

The Rathkeale project area is open to year round exploration and is accessible via the national primary, secondary and local road networks. Mining and exploration activity benefits from Ireland’s stable fiscal and regulatory regime with excellent, and cost-effective  exploration service infrastructure.

The rocks underlying the Rathkeale Block are primarily Lower Carboniferous in age.  The geological history of the area progressively records the early Carboniferous marine transgression across the Old Red Sandstone continent, development of Viséan basin and shelf palaeo environments and later deposition of the late Namurian strata of the Newcastle West area.

Key Elements to Prospectivity of the Rathkeale Block

The Rathkeale block has strong potential for the discovery of economic, Irish Type Zn-Pb mineralization and based on initial reviews a two-stage work programme is being pursued with the first phase now completed:

Work programmes focussed around a high resolution 2D seismic survey; including reprocessing and interpretation of historical geological, geophysical and geochemical data for the block. Detailed remote sensing and tecto-stratigraphic studies have also been undertaken to identify key structures. Fieldwork has included;

Phase one activity is considered to have demonstrated the prospectivity of, and identified targets on, the Rathkeale Block.

A radically new structural understanding of the area has been developed through the seismic survey.  This revised interpretation has resulted in the identification of several targets in addition to a re-assessment of historical targets. These are being refined through innovative geochemistry surveys to identify zones of potential upfault leakage from concealed massive sulphide.

The seismic has provided a clear targeting strategy, a number of near drill-ready targets and an approach to advance secondary targets towards a drill decision

Diamond drilling is warranted to test the emergent targets.

The Rathkeale block has a series of features consistent with the development of large scale hydrothermal system(s) and is considered to be highly prospective for Irish Type Zn-Pb deposits.